Monsignor J Cunningham of the Leongatha Parish had the foresight to purchase fifty acres of land on the town boundary as the site for a future college. It was not until the late 1970’s that the vision became a reality with the creation of a working party to oversee the establishment of a Catholic secondary college serving the parishes of Leongatha/Korumburra, Foster, Wonthaggi, Koo Wee Rup and San Remo. 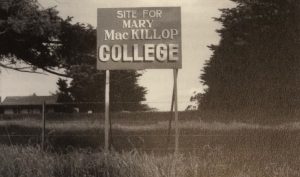 In 1986 the new College opened its doors in two portable classrooms behind St Laurence’s Primary School, with sixty-six Year 7 students, three full time teachers and a new, most enthusiastic Principal, Mr Ed Carmody. The following year saw the College expand and re-establish on its present, permanent site with an old farm house as its administration centre and a collection of portables as classrooms, library and central meeting place. During that year, the College was fortunate to establish a link with the Sisters of St Joseph, St. Mary of the Cross MacKillop’s order, by securing the services of Sister Briege Buckley. Sister Briege subsequently stayed for the next nine years until her return to Ireland at the beginning of 1997. Mr Michael Delaney commenced as Principal in 1999 until 2014 followed by the appointment of Mr David Leslie in 2015 to 2020, Mr John Freeman commenced in 2022 as the Principal.

In 2010, the College celebrated the canonisation of St Mary of the Cross MacKillop. Eleven members of the College community made a pilgrimage to Rome to represent the College at this ceremony. The Josephite connection to the Sisters of St Joseph continues with the College’s involvement in the Association of Josephite Affiliated Secondary Schools (AJASS).

In 2016, the College celebrated thirty years as a vibrant learning community. Priding itself on the values espoused through the charism of the Josephites, the sense of hospitality and welcome permeates through the school community. The College, now with 580 students, offers a breath of learning experiences for its students across all learning areas, providing the best possible outcomes for each student, ensuring they are well equipped for their chosen post-school pathway be it tertiary study, vocational training or employment.

The College emblem depicts the Cross in the background with the Holy Spirit in front, its wings segmented into five sections representing the five parishes of the region. The College motto “Sapientia Domini Docet Nos” translates as “The wisdom of the Lord teaches us”. 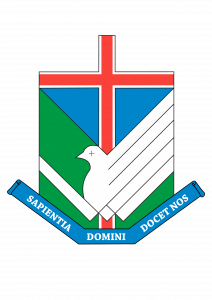